So we did it – we put on our second intranet conference, and again filled the hall with intranet and comms people from across the country and across industries.

Brian and I are very pleased, obviously, to have been able to do this for you. We did last year’s conference because there was a real need for a vendor neutral practitioner led conference, and although there are more intranet related conferences this year, we’ve proved (you’ve proved) that there’s a need for our fast-paced and informal conference and discussions.

But what really happened on the day?

We were ten minutes late starting, because there was trouble on the trains and the Central Line, and about 30 people streamed in a few minutes after our scheduled start time of 9:10am. However, we lost one speaker owing to illness, so this ten minute delay did not dramatically affect our timings, which as you might have noticed from the agenda, were hilariously specific and to-the-minute.

This was the fourth time that Brian and I had ever met; we work together every day (as partners in our new limited company) digitally, and so it was a real pleasure to be together. As you might have noticed, we don’t script ourselves, and so we just take to the stage every so often to explain proceedings as best we can. Somebody told me that we sounded good together (The Odd Couple…) so that was nice.

Thank goodness for our great sound guy, Ilya. He mic’ed everyone up and tweaked the volume for each speaker – and as we had something like 18 speakers, we kept him busy! 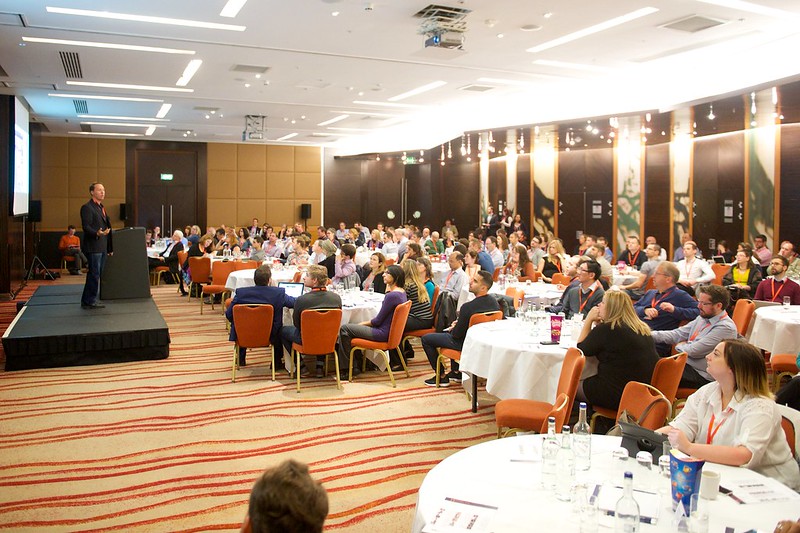 Lunch turned into a sit down affair, which seemed very friendly.

Hosting both the Information Manager of the Year Award (UKeiG) and the Intranet Innovation Awards (UK) (Step Two) is an honour, and highlighted the crucial role of metadata, and also DIY efforts and design focus. We had two of the Innovation winners on stage with case studies (Shaula from RPP and Martin from Barclays) so that was great.

As we got into the afternoon, we transformed into an unconference. I bribed the first five practitioners to pitch topics for conversations with books from Oscar Berg and Mark Morrell, but it was an open process and between everyone we offered 28 sessions across 7 separate rooms (if that sounds manic, participants could generally only choose four to go to, phew). 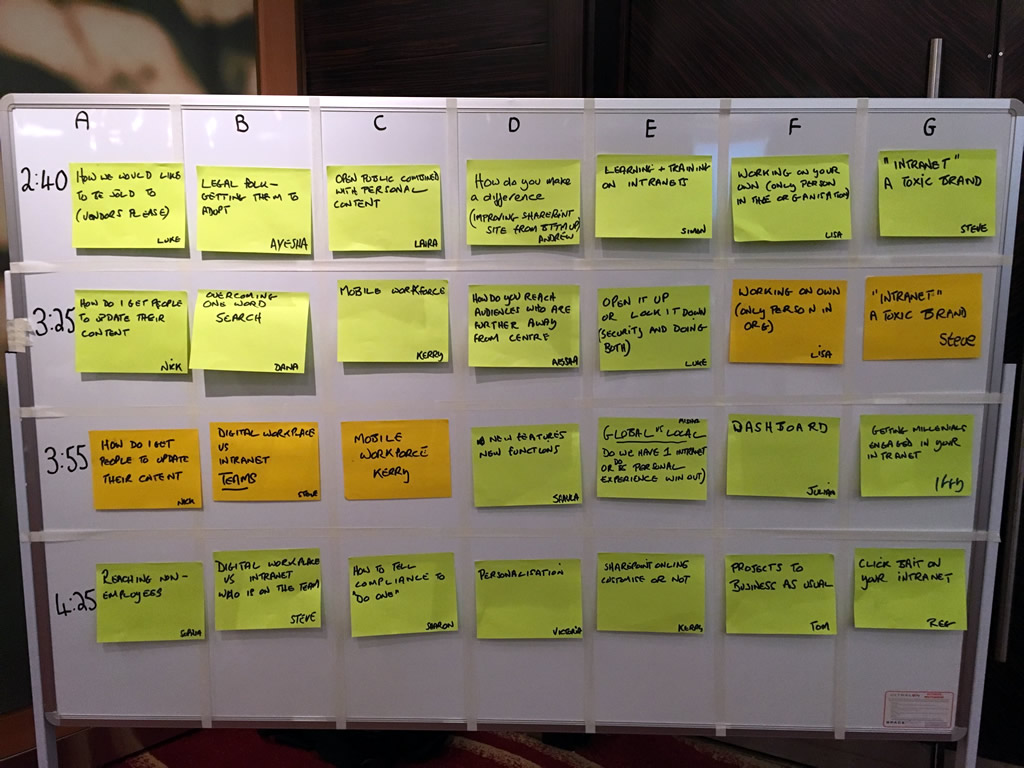 While the unconference part of the day must, we feel, remain unplanned and free flowing, we did hear a couple of suggestions as to how we might streamline the pitches and the building of the schedule (which was on two boards and two big screens this year). What we might do next year, is take five or six ‘good ideas’ for discussion topics from the morning’s presentations and pre-populate the board schedule. We still must, we feel, ask for pitches from participants (what with it being an unconference) but perhaps a few pre-scheduled discussions will help get the ball rolling.

Colonel Mustard, in the library, with an rfid-enabled candlestick – my take on @paulzimmerman's #intranetnow talk pic.twitter.com/KqklaXY0vX

Then of course we got to give our very own award, the Diamond Award, for remarkable contribution to the intranet community. Naturally, we invited Martin White (2014 winner) on stage to discover and reveal this year’s winner.

We collected your feedback, and will take your thoughts into account when we design next year’s event. Because you filled in your feedback form, you raised £166 for MacMillan Cancer Support.

Over drinks, people frequently told me that they loved the format, especially the short sharp lightning talks (just 5 mins on stage). A couple of speakers said that they felt very well directed and looked after, and a couple of speakers suggested that we could provide better timing guidance, and make the presentation files easier to find and open. So we’ll look into that.

Personally, I would like to thank every individual involved for being self-motivated, thoughtful, and helpful. The speakers, the topics, and of course the thoughtful audience made the day.

Further, Brian and I must thank each sponsor for choosing to be involved. Many people remarked on the good value price of our tickets and the expense of the venue (we require a lot of rooms, and a nice hall) and all of that is only possible because of the commitment of sponsors. To be clear, our sponsors are not just ‘there’ because of the opportunity to meet you, but literally ensure that Intranet Now exists. This commercial partnership goes beyond marketing, as is all about supporting the community and the very sector that we all work in. 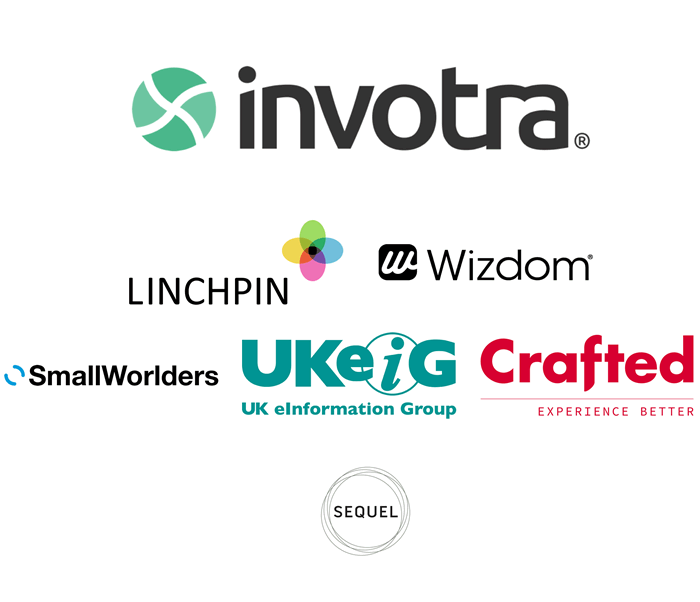