What it’s all about

The Intranet Now Diamond is awarded to an individual for their remarkable contribution to the intranet community.

It’s as simple as that.

If someone has influenced your work, or if someone frequently helps them, nominate them to recognise their contribution.

Nominate someone for the 2018 Diamond Award, for remarkcable contribution to the intranet community.

Your nomination should be active on social networks and / or publish regular articles about the intranet as a digital channel and productivity platform. This is not about a person who has built a great intranet, it’s about a person who shares their experiences.

To nominate someone, tweet or email Brian on @BLamb or Brian@intranetnow.co.uk

We need to update this page – for now, go see the blog about the winner.

We give out one massive diamond award each year, except this year – as we had to recognise James Robertson for his long-term contributions to the intranet community on a global scale.

Further, the in-house practitioners (and now in 2017, a couple of consultants) that make up the Intranetizen collective won for their enormous contributions.

James Robertson (above left) was surprised by Wedge while touring the world with the Step Two ‘Intranet and Digital Workplace’ award winners.

After presenting award winning intranets to a full room in London, Wedge presented James with the Diamond Award.

James was not able to attend the Intranet Now conference in 2016 owing to his schedule. He does live in Australia after all!

You simply must get familiar with the Intranetizen blog and podcast. Their insights, experience, and guidance is invaluable.

The Intranetizen crew is made up of four members. From left to right, Dana Leeson of BSI, Luke Mepham of Aviva, and Jonathan Phillips (then) of Coca-Cola European Partners. Far right (not politically) is Sharon O’Dea, who was working abroad at the time.

Dana and Luke were wearing Intranet Now shirts as they helped out with our conference on the day.

Last year, when we launched the Intranet Now conference, we also launched a new award for remarkable contribution to the intranet community. It’s a remarkable award too, as it’s for an individual, rather than a team or a company. As it was the first year, we were able to surprise Martin White with it, and so we were very pleased to invite Martin on to the stage this year to present the 2015 award. 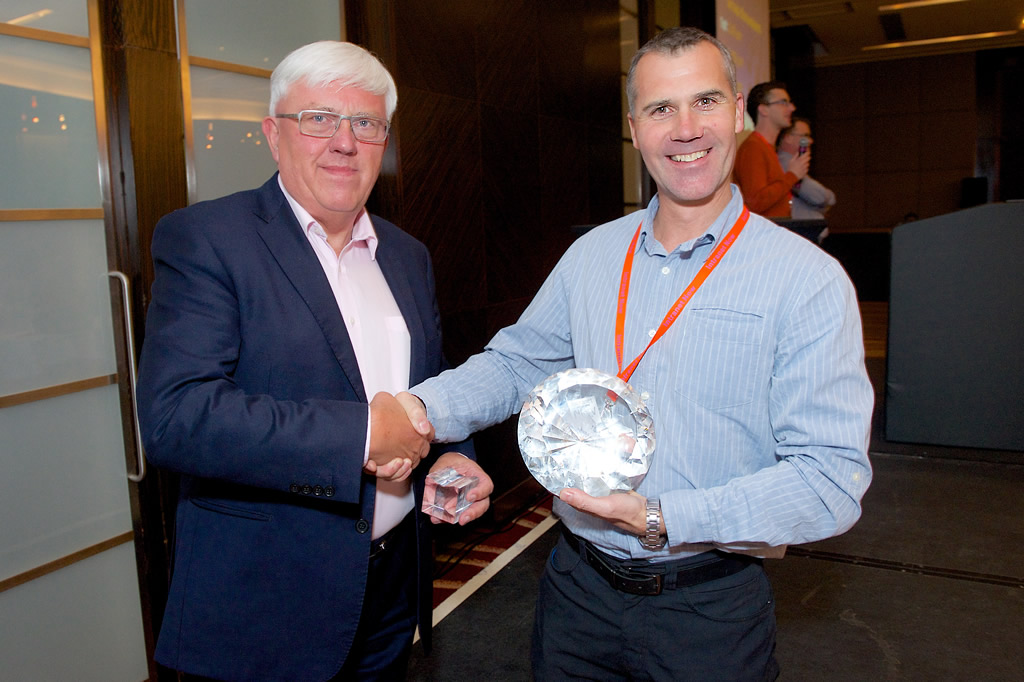 As you can see from the shortlist, there was respectable heavyweight competition.

Now, full disclosure; I work with Sam on occasion, so I had to check my feelings about this a lot. I’m glad to say that, while this award was decided by Brian and myself, we listened to Martin White’s informal reckonings and so yes, Sam is our clear winner for 2015 for his obvious influence across intranet design and use.

Sam is a prodigious writer, offering guidance and expertise from his website and CMSwire. Sam is always available on LinkedIn and Twitter for help and conversation, and he’s a well-known and well-liked speaker and trainer. In many ways, he’s an all rounder and yet an intranet specialist, having built his consultancy services up over the past decade, after previously being a major intranet practitioner.

The Intranet Now Diamond Award is mine and Brian’s to give, as recognition for outstanding contribution to the community that is so very important to the health of the intranet ‘industry’. But beyond ourselves, we now have Martin White and Sam Marshall as official, formal, award board members, to help steer us in 2016. 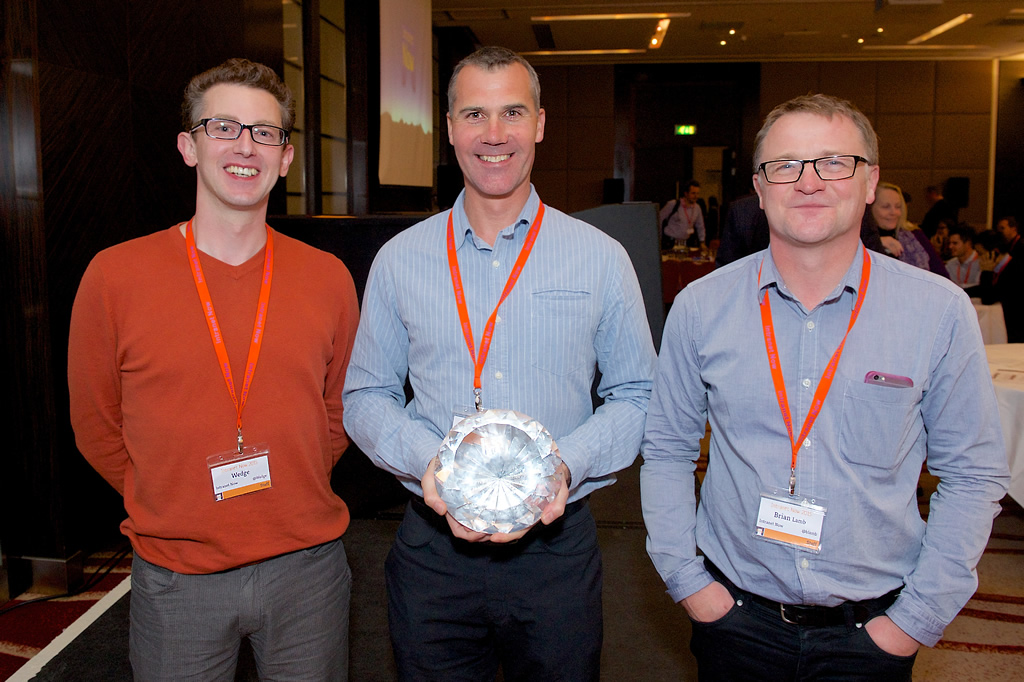 The award is open to all; we accept all nominations to the the ‘long-list’. We very much look forward to, perhaps, awarding the massive diamond to an in-house practitioner who shares their challenges, progress, and successes through the next eleven months.

“The best time to plant a tree is twenty years ago, so today I want to start an annual tradition”, is how Wedge introduced the Intranet Now award.

Brian and Wedge told no one of the plan to launch an award – there was no nomination process and no marketing, and so they were able to literally surprise the winner and the audience.

The award is given to an individual, not a company, not an intranet. It is awarded for remarkable contribution to the intranet community – and so it focuses on contribution, as well as excellent work.

Our first winner is Martin White. Although this year’s ‘award ceremony’ was rushed, it was a complete surprise and it is expected that Martin will present the award to the 2015 winner.

Above, Martin White opens the box, with Brian Lamb, and then Wedge on the far right.

The Intranet Now diamond is awarded to individuals for their remarkable contribution to the intranet community.

Above, Brian Lamb, Martin White with the massive diamond, and Wedge.

Martin White has contributed so much to information management, search principles, and intranet design, over a good period of time and further, shares his experience freely and widely.

If you’re wondering whether you were on the long-list, then the answer is yes. The short-list was very difficult to put together, and Brian, Wedge, and Martin look forward to presenting the next diamond at Intranet Now 2015.