The presentation is embedded at the end.

Good afternoon and thanks very much to Wedge and Brian for giving me the ‘after lunch’ slot; the ever-popular graveyard shift….  Regardless, I hope that the next 15 minutes or so proves to be time well spent for you all.

Today I’m going to talk about some guiding principles for communicating with other people,  which apply not only to intranets and other mediums but that, I think uniquely for today’s event, will also improve your love life.

A few years ago (when I was working for one of the big consulting firms),  I came across something that made me smile,  whilst at the same time making me think about the area in which I was working – human resources and change.

The CIA had just declassified their 1944 Simple Sabotage Field Manual.  This Kafkaesque guide claimed to provide the means to subvert any organisation through the use of “purposeful stupidity” or, as I like to call it, “weaponised HR”.  I’m sure the irony will not be lost on you all, what with the shenanigans going on with the Trump presidency, but here was quite possibly the first (and hopefully not last!) example of HR adding value at the highest level.

As a trained scientist (my best line is that I went from human remains to human resources), I took this field guide with a pinch of salt, as I couldn’t find any evidence beyond anecdotes that any of the disruptive practices it suggested would affect organisations.  Remembering that, anecdotes (even lots of them) do not equal data.

Then along came the work of Said Business School’s Danish economic geographer, Bent Flyvbjerg, and his team, who are engaged in understanding why projects fail.  It turns out that there are three major reasons for failure. The first category (which other speakers have already mentioned today), was referred to by Flyvberg  as technical and estimation problems. Not too much of a surprise there. The second and third reason, however, really interested me as a student of the CIA’s “purposeful stupidity” (mentioned above).  One of these reasons was “psychological bias”, which refers to mental shortcuts (A.K.A. heuristics) in our thinking, which are not always accurate.  So, for example, what do you immediately think if you see a punk rocker, resplendent in Mohican haircut and Nazi tattoos running down the street with a ladies handbag?  Most people assume  he has stolen the bag.  The fact is that he is running after the old lady who just left her bag at the bus stop.  That quickfire mistake is a form of psychological bias.

The third reason identified in this research was a real humdinger – it was lying.  Now, this was interesting and initially a little surprising.  Whilst I’m sure few of us are guilty of telling big fat lies at work, I’m sure you can all think of examples of when you told a little fib about things like costs, reporting deadlines and update schedules.  If you think you haven’t ever lied at work, you may have just lied to yourself – which is a fascinating topic in itself, but a little out of scope for today. 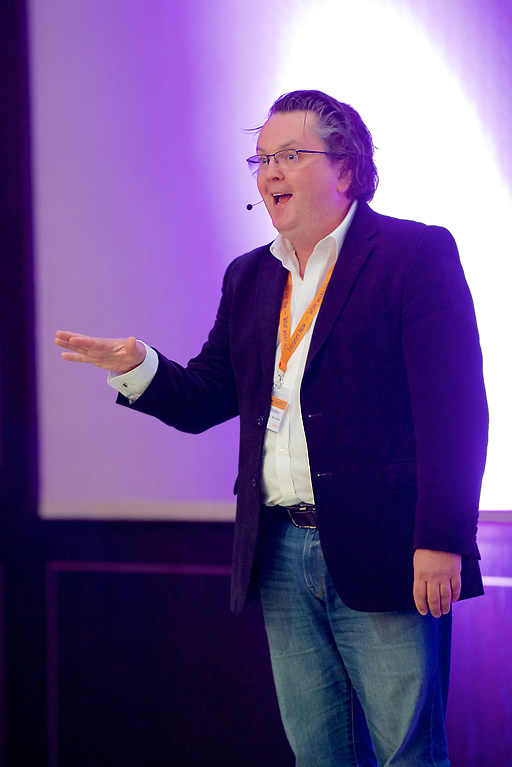 Moving on, like many people including the writer and scientific thinker (and one of my heroes), Douglas Adams, I enjoy technology.  However, and especially when we are talking about human interaction, he said: “we are stuck with technology, [when] what we really want is just stuff that works”.  Like the excellent Martyn Perks from this morning’s session, who suggested that productivity has flatlined over the past couple of decades, I also suspected that our organisations and corporate communications may not be operating better, despite technology levels being at their highest and most efficient levels in history.

So I asked myself, what could we do to help our communications to be more effective?

Initially, let me ask you all a question. Do you trust me?  Well, thanks don’t all rush at once.  OK, perhaps you could trust me for just for 15 seconds?

Now I’d like you all to close your eyes (don’t worry, Wedge isn’t allowed to move).  What I’d like you to to do is imagine a dog…..got it?  Now I’d like you to put that dog in a yard.  Ok?  Right thank you, you can open your eyes.  Normally at this point, I’d go round the room and ask everyone to share their vision.  However, given that there are so many of you, let me do this another way.  I imagine that the majority of you have just seen a picture of a dog that you have met before, perhaps from your childhood or a current dog and, if not, perhaps a famous dog like Lassie or maybe the Dulux dog?  Likewise, I’m sure that many of you will have seen your own garden or that of a family member or friend? I also suspect there are a few Walton-like, American picket fences out there and a smidge of Coronation Street brick yards?

Now, ask yourself what I just did and how did you responded.  I asked you a simple question, and you all answered it differently.  This is perhaps the most important point I will make today.  We all have psychological shortcuts built into how we perceive our environment and, whilst this may have saved our ancestors from advancing sabre tooth tigers, it means that we have to work extra hard to make sure everyone using our intranet or receiving our communications is seeing the same ‘dog in the yard’.

In fact, even with those simple words, some people see atypical things like ‘marihuana’ for a dog or a ‘yard of ale’ or ‘a length’ when I mention a yard.  Now just imagine the complexity of thoughts that would pop into your heads if I had asked you to think of overused corporate words like strategy, value or leverage? How many different versions do you think would appear then….?

This phenomenon is often referred to as ‘attention blindness’ and is something not helped by the sheer weight of information that is competing for our attention at any one time in today’s workplace.  I bet a few of you have even checked your devices during the short time in which I have been speaking.  That small action can result in your missing something important , and hence ‘attention blindness’.  So what can we do about this?

Well, the first thing one must do is to listen to what people are saying (or trying to say).  I believe this to be so important and indeed such an intimate response,  that I borrow from the poets and refer to listening as ‘touching at a distance’. 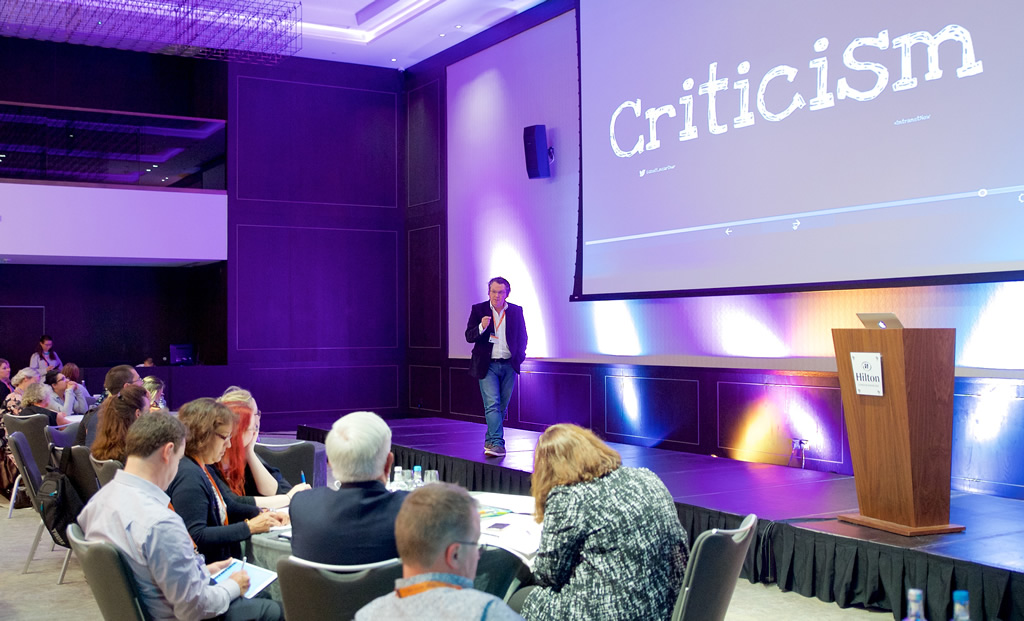 There remains no better environment in which to listen to one another than face-to-face.  I also doubt that science or technology will ever discover a better method or place for communication than the cigarette break….  The great thing about the old smoking place was that people from right across the organisation congregated there and chatted about what was going on with other smokers, regardless of their department or rank.  One of the drawbacks of today’s environment is that we tend to work from within our own little islands of interest, where we talk shop with people like us, and with similar perspectives.  I refer to this type of communication as narrowcasting.

Referring back to my scientific days, this is a bit like something called ‘adaptive radiation’.  There are circumstances when animal species, particularly in places like Australia, are isolated for so long that their physiology alters and they can no longer mate with other animals, with whom they used to mate. So, as I said at the beginning of this talk, communicating with others is not only good for your organisations, but it could even be good for your love life.

So how all this expresses itself is as human bias, which explains some of Flyverg’s findings.

Now, before I go onto my next point, do you recall the ripple which went around the room when Wedge introduced Rita Zonius as a New Zealander rather than an Australian?  Well, like the images here, there are some actions as well as words that immediately cause us to take a sharp intake of breath.  I call these ‘red moments’,  which I’m sure some of you are experiencing right now just by looking at the flags on the screen, alongside the word ‘referendum’ and with the image of Donald Trump.  It won’t surprise you that expressing support for the English football team in certain Glasgow pubs is another such red moment…

This is not a trivial matter and can have serious implications for the World, countries, organisations, projects, and individuals.

So how might we deal better with these red moments?  The first thing to realise is that telling someone that their facts/understanding are wrong, or that they are stupid, often has the opposite effect to what you may wish.  This is best explained by this 2300-year-old meditation from the philosophical movement known as the Stoics.  “Opinions are like nails; the harder you hit them, the deeper inside they go.” This principle, known in current day psychology as the ‘backfire effect’, suggests that some individuals, when confronted with evidence or opposing beliefs, come to hold their original position even more strongly.

To counteract this, firstly we have to appreciate that organisations, like biological organisms, are always evolving.  This suggests that they are always in conflict with themselves. Truth manifests in that conflict, but that truth is unstable and, as a consequence, always on the move. That is both a leader’s greatest dilemma and opportunity, and I believe this to be one of the reasons why bias and lying are such a barrier to change.

From this understanding, I believe we have to look for a new approach to communication that mitigates some of the biases inbuilt in us, and recognises the changing nature of our organisations.  This is a pretty complex challenge. However, I believe that some research carried out using the social media platform ‘Reddit’ and its ‘change my view’ discussion area, provide some promising practice for everyone engaged in communication. 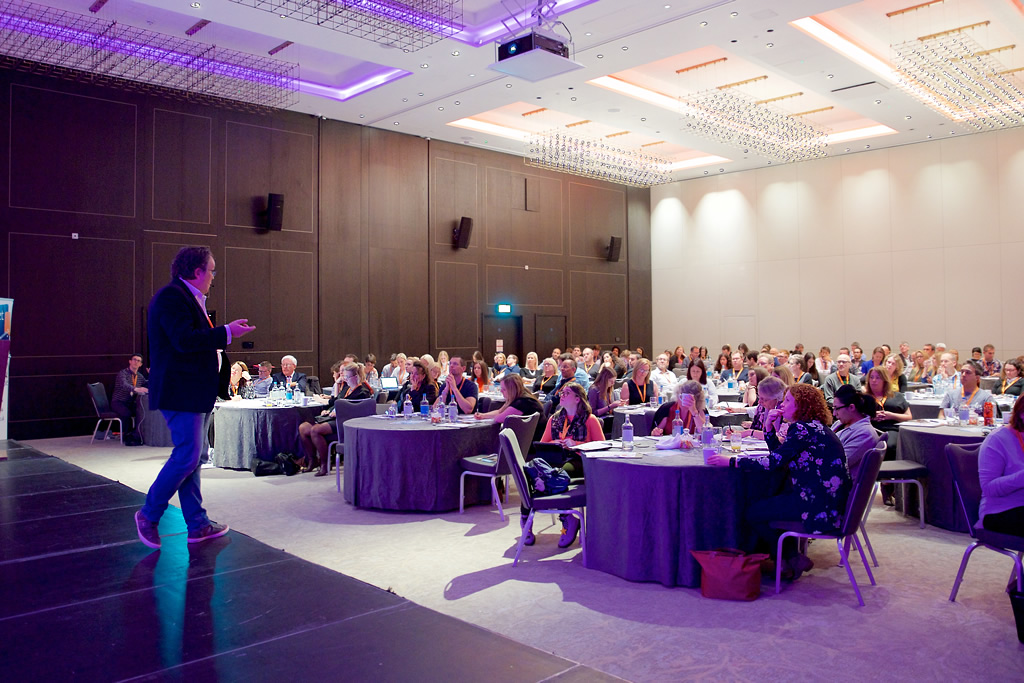 This research, most recently highlighted by the writer and philosopher Daniel Dennett, suggests that dialogue, rather than debate, may help us overcome some of the difficulties and biases inherent in communication.  Positive dialogue seems to be supported by following four simple steps:

The Reddit research suggests that this simple process can create a positive environment for discussion and, even where it does not change someone’s mind, it seems to support further constructive discussion.

This is a powerful idea, and it’s fascinating that it mirrors the rules of Anatol Rapoport, the Russian-American psychologist and father of social interaction and game theory.

I sincerely believe that if we grasp this way of thinking it could have a Promethean effect on our communications. I hope you have found the past 15 minutes of interest and that it was time well spent.

I will leave the last words to another poet, George Bernard Shaw:

“The single biggest problem in communication is the illusion that it has taken place.”