You find yourself coming out of Vauxhall tube station. You bear left and walk along the road, passing a couple of bars and then heading to what you imagine is the hotel. 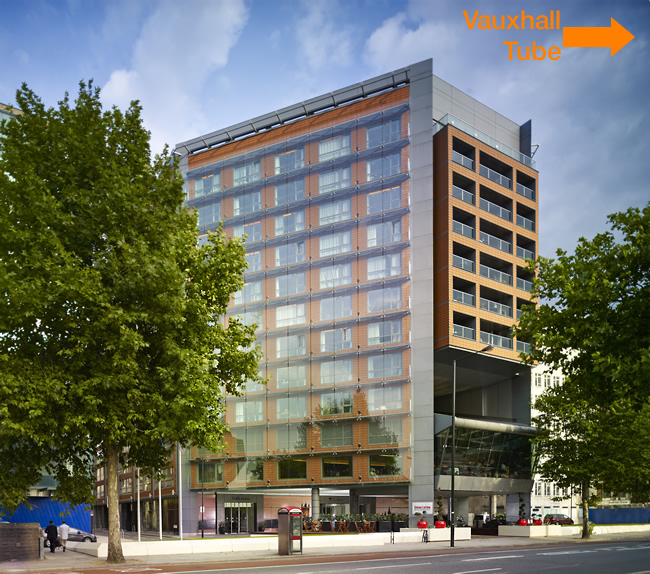 Eight minutes later, you arrive at the Park Plaza Riverbank Hotel. You enter, ignore the bar, and turn left into the main lobby. The main desks are on your right, but you turn left and join a couple of people in front of the lifts. They can only be conference attendees as well, so you say ‘good morning’ and enter the lift together. You press to go down four levels, and step out into a tiny lobby.

Stepping further, you enter the foyer – you are greeted by a stoic usher who looks more like a security guard. You look for the registration desk, but it seems like this is a mini exhibition hall. You finally spot a crowd of people at the far end of the room and head towards them. 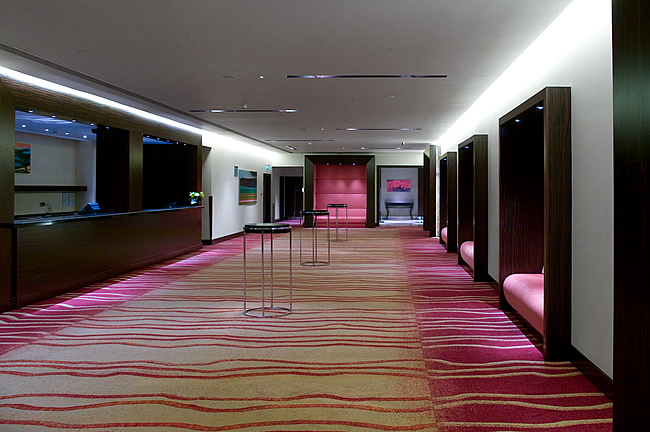 Dana, Luke, and Tom are handing out name badges on lanyards. You pop yours over your head. Someone who looks like Wedge (but more handsome) swoops behind the registration desk. Now, time for coffee.

The foyer begins to fill up, so after politely looking over a couple of sponsor stands, you head into the main hall. The stage is in the middle of the back wall, but there are screens at either side, so you don’t mind where you sit. You head to the left side of the stage.

Hall fills up, and that handsome man takes to the stage. Oh it is Wedge, and that must be Brian.

After Wedge and Brian’s welcome, James Robertson appears with a slick presentation, and then segues into presenting several large glass awards to European winners. One of the winners presents a case study.

Next it’s a sponsor, and a detailed case study.

And now it’s the morning break already. You should have sat to the right of the stage. Now you’re going to be one of the last half of people to get a coffee. Oh look, pastries.

Jules is shouting that everyone should head back to the main hall.

It’s a talk from a sponsor, in fact it’s Kevin Cody who you’ve seen talk before. Always good. Oh it was only seven minutes long? Was that a lightning talk then?

Up next is Luke Mepham and Sam Woods from Aviva. They seem like cheerful souls. Is it too early to swear like that?

Now it’s another sponsor. UX something. Only 7 minutes again.

Next it’s Kristian Norling – he’s good on Twitter. Does events and intranet related books. Only five minutes? Why not longer?

Now on is Sara Redin, talking about intranet business cases. Fifteen minutes, and you take lots of notes. Stakeholders need this stuff.

Now it’s Carolyn Mitchell, and how she does UX research with almost no budget. Very practical. You write one big bullet point. Must action this when back at desk. Only five minutes. Lightning fast.

Who’s next? It’s a speedy pace. Are we behind time? Check the agenda online. A couple of minutes behind.

It’s a sponsor next. How to select intranet platforms. How indeed!

Your neighbour stands up; he’s getting a microphone put on him. Francis is now talking about UX in detail, but only for five minutes. You must ask him more during lunch.

Now it’s Susan Quain – according to the agenda, she’s got 23 minutes. This must be another ‘keynote’ then.

Now it’s lunch, and it’s a bit of rush to get out. You hang back and talk to Francis. He’s been sketching notes all day too, so you ask to see the last one.

It takes you fifteen minutes to get served. Yes, you’re one of the last to get into the foyer because you were chatting, but still. Oh well, you like all the food, and there’s plenty of it. You wonder how much everything cost, and whether they could have afforded a bigger venue. Then you remember how cheap the tickets were. The venue is very posh and big enough.

You get into a group of people over coffee, sat at someone else’s table. Then before you know it, everyone’s coming past you, and Wedge and Brian are on stage again, welcoming everyone back.

Now there’s a quick presentation from a sponsor.

Luke takes to the stage – wasn’t he on this morning? Oh he’s talking about employee experience this time, and he’s got twelve whole minutes. Good.

Now it’s Jennifer Haines from Telefonica, talking about ESNs. Will that mean Yammer, you wonder.

Up next is Richard Hare, talking about community management.

Oh Wedge and Brian are on stage again, trying to explain how the afternoon’s unconference will work. Is it now? Do you have to stand up? Oh, people from the audience are suggesting discussion topics. It’s about group discussion. There’s now a queue of 20 people at the stage – Wedge is getting them to propose a topic in one sentence, and Brian is writing it down.

You decide to participate in Martin’s group discussion at least. When is it? Where is it?

Is it now? Ah, no, not yet. In ten minutes. First we have Áine Murphy of Macmillan Cancer Support – a lightning talk about intranet redesign.

Now we have Jessie Punia, who spoke last year. Audience seems to welcome her warmly.

Brian and Wedge are back, saying you should find your first group discussion by looking at ‘the boards’. There’s one in the hall and one in the foyer – each shows the topic, the time, and the location. Oh we have five big rooms and three other spaces for each group discussion.

Five people didn’t have chairs, so they ran out and got more from the main hall. Martin’s discussion could have gone on and on – everyone had so much to say. And it was nice talking to your neighbours. Oh it’s break time. Over too soon.

Best coffee break of the day – you needed it, and everyone seems to be buzzing. Lots of chat.

It’s announced that you have to go ‘back to the boards’ and choose your second group discussion. You can’t remember who said what on stage, but the digital comms related topics sounds interesting. Oh it’s held in the main hall – over there. OK, there’s a ring of chairs and a couple of tables have been moved. You sit down.

You do this twice more. Check ‘the board’, find your discussion space, and then it’s back to the main hall. Some people are tidying chairs and moving tables back before everyone settles. You’re relieved to sit at ‘your’ table again, even if it doesn’t matter where you sit.

Brian and Wedge look very happy with themselves. Maybe they don’t get out much? You think Brian’s from Ireland. Something about drinks. Are they free? You’ll go if they’re free. Oh, one more thing. Another award? Oh this is the Intranet Now award. Someone in the audience is about to get surprised…