The skills and knowledge that intranet teams are expected to have are changing. One skillset that is increasingly in demand is usability.  At its simplest, it’s basically watching people trying to use your intranet, observing what is working and what is not, and making improvements driven by what users are trying to do.

Usability tends to be thought of as an approach to design and building of intranets, but it’s increasingly seen as part of continuously improving the intranet. It has been seen as an expensive specialist skill, brought in during the design phase, so teams that can use their own resources will be highly prized.

Websites and intranets can be hard work, both for the people who create them and for their end-users. Simple usability techniques can offer a route to overcoming common problems like; employees not being able to find things; revision of clunky internal processes, and confusing menus and links.  The following three low-cost usability test methods have worked for me.

This is cheap, quick and low-tech and is perfect for testing processes, labelling, and wire frames.

Print some screenshots and lay them out in sequence. You can pin instructions with where to start and finish along with question sheets that people can fill out and post in a box once they’ve finished. Alternatively you can verbally walk them through, taking notes as you go. Chocolate is a good reward – not many people turn it down.

Our HQ building has 15 landings, a staff restaurant, a coffee shop and around 1500 employees. That’s a fair sample for the intranet; 73% live in the area so they also make good testers for the corporate website.

Watch this film First Fridays by the US Government to see how they do it.

Ideally this should be done at the tester’s desk, so they are completely comfortable with the surroundings and the tech; but this can be tricky so we invite people to join us. The example scenario is for our external website, dealing with rubbish collection, but I have adapted it many times for testing common intranet tasks

We give them a scenario with related questions. For example:

The first two questions need the tester to write down the answer. The last two should result in a test form landing in a back office system, i.e. they complete the form online and submit it.

Whatever you test, keep the scenario simple – in real life people do one thing at a time. Explain to testers that you’re not testing them, you’re testing the site.

Don’t help them – that’s cheating. If they don’t understand the scenario, you’ve made it too difficult. Be impartial.

Give testers a get-out clause. If they would have given up and picked up the phone, let them record that. If you don’t, they’ll feel like you’re testing them and will either keep going round in circles or will get so frustrated they’re likely to blow a gasket.

If you’re testing a website, start them on Google, not your homepage. What they search for tells you a lot and often the Google search results are your real homepage, not the one you spent ages designing and fighting over with management.

Live testing should be filmed over the tester’s shoulder so you can see how they navigate around the site. Be unobtrusive – don’t hover or bother.

When you play the film back note the time taken for each step, note the navigation path, note what terms people use in the search and in forms, and note each step taken. Keep calm because you will get annoyed and you will want to shout at the screen, ‘No, why are you doing that?!’

Each time we run testing sessions I’m amazed at the different ways people navigate. Some use the site navigation, some use the A-Z, some rely on the site search and some use a bit of everything, including the breadcrumb trail. And that’s just it – we think we know how people will use our websites but we really don’t have a clue until we watch them.

This sounds complicated and expensive but it really is low-fi. There’s no software involved, no expensive training and no special equipment. All you need is some squared paper, a pencil, and a ruler. 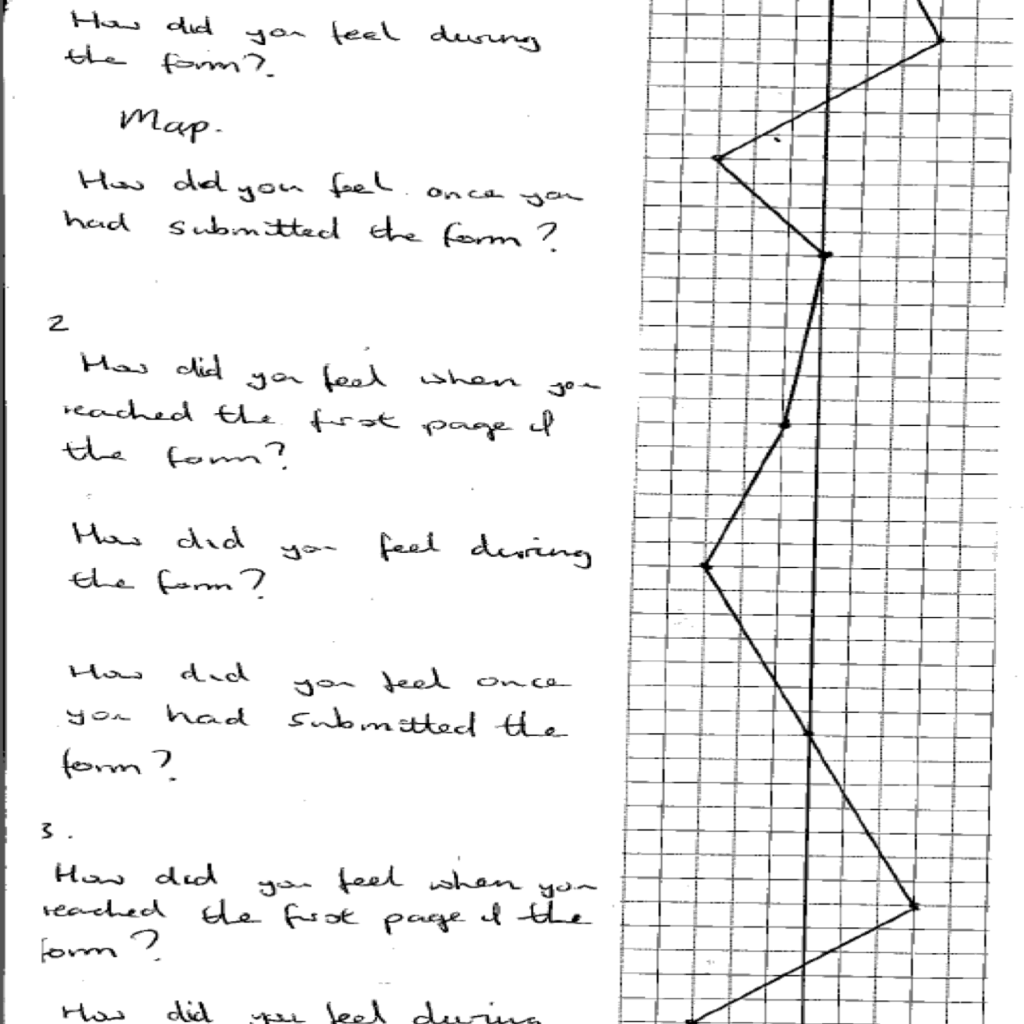 Create a graph where the X axis contains each stage of the process. The Y axis ranges from 0 to 10, where 5 is neutral – draw a line right across the graph at 5. Ask the user how they felt at each stage of the process and plot it on your graph – anything below the neutral line they felt frustrated, sad, angry, bored etc., and anything above the line they felt satisfied, happy, chuffed, excited. Join the dots and you’ll see clearly where your process is causing problems.

When you find that lots of people rate the same elements as below 5, you’ll see it’s obvious that things have to change. After you’ve made changes, you can test again.

Sometimes there will be things above the line that aren’t necessary for the process but people like them. These are known as purple cows and you should keep them, even if they aren’t essential to you – they may even offset some bad points in the process you can’t fix for one reason or another.

If you need to use the graphs for a report you can tidy the graphs up in some kind of graphics software and add smiley faces, little hearts, and even purple cows if you like. I wouldn’t go spending a fortune on fancy testing software because you’re best off doing the original work on a piece of paper while you sit next to your tester having a chat at the end of the session.

Some practitioners reckon that users will tell you what you want to hear but when you match up the mapping with the film you get a complete picture of the person’s experience.

So that’s my three techniques for getting started, with little or no outlay, with usability. Observing people trying to use the site that you made – it’s really that simple. Making the resulting improvements, well that’s another matter.

User experience testing on a budget from Intranet Now